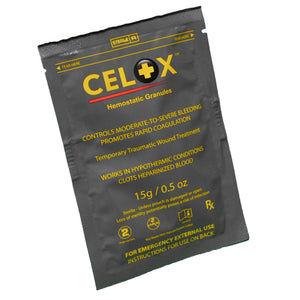 Celox is currently considered one of the top two hemostatic agents available according to a recent study conducted by the US Army Institute of Surgical Research. Its application is simple yet effective, and it has little effect on the surrounding tissue. If you are seeking a hemostatic agent for a kit or your organization, Celox is a great choice. This is a chitosan-based agent and is in granule form. Pour the granules in to the injury and apply pressure to stop bleeding. The granules form a plug, which stops most bleeding within one minute. For major hemorrhaging, maintain pressure for 3-5 minutes to ensure the bleeding is controlled.

Celox is made with chitosan. Chitosan is made up of compounds of glucosamine, a sugar that is normally found in the body. Celox does NOT use non-degrading procoagulant minerals or nano particles such as smectite or kaolin, which will remain in the body indefinitely unless completely removed.