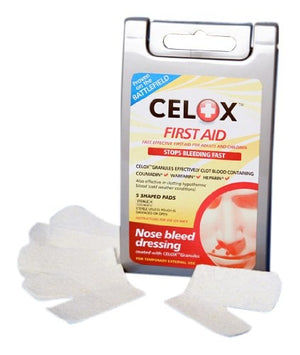 The power of Celox is now available in a dressing specifically shaped for nose bleeds. The same highly effective Celox granules used for emergency first aid are bonded within Celox's Nose Bleed Dressing to provide an effective way to control any type of nose bleed. Each pack contains 5 shaped pads. Pad is easily inserted into the nostril to effectively stop bleeding.

For nose bleeds: Fold pad vertically in half and insert into bleeding nostril. Apply fingertip pressure along bridge/side of nose. Bleeding stops quickly, with no re-bleed when removed.