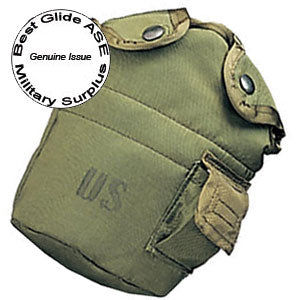 The Military Surplus Canteen Cover is Made in the USA. Designed to fit on the 1 QT Military Issue Canteen, this military canteen cover is issued to U.S. Military Troops. It should not be confused with versions that claim to be "made to military specs" or "GI Style Canteen cover", which are not the real thing.

The Military Surplus Canteen Cover is a piece of no frills survival and outdoor adventure equipment. It will fit many 1 Quart Canteens perfectly, to include the U.S. Military Issue Canteen and the NATO Water Bottle.

Don't be confused by the low cost of this item. Because of its years of use and production, these canteen covers are very inexpensive but they are NOT a reproduction. They are a genuine issue item. Also take a look at our Zulu Canteen System Holder which will hold all of your U.S. Issue Canteen accessories, in one convenient unit.

Our Military Issue 1 Quart Canteen Covers are divided into three categories: New, Very Good and Used. See below for a description of each.

New/Like New - This means the Military Issue Canteen Cover was received by us still in its original packaging, labeled as new or showed no signs of previous issue or use.  In many cases, an item looks new and unused upon inspection, but to be sure, it is included in the Very Good Category.

Very Good - The item either appears to be in unused condition or has slight marks that show it was either issued and stored or was used several times at the most.  There will be no tears or rips in the fabric and Velcro and snaps will be in fully functional condition.  The coloring will be in very good shape.  There may be dust on or folds in the fabric showing where it may have been stored for an unknown period of time.  If there are any apparent repairs, they are in this category if it is evident they were made either by the military or by the manufacturer and brought back to new specifications.

Used - This includes everything else, while still assuring that the Military Surplus Canteen Cover is fully functional.  There may be minor rips or tears in the material.  However, the insulation and snaps will be intact and fully functional. There could be some slight discoloration, stains, permanent marker writings or signs that the canteen cover has been used.  In short, it is fully functional but will not look new.  Most have the "US" designation visible and many have de-militarized designations written on the cover.  However, again, in this condition the canteen cover is fully functional and will do everything it was designed to do when new. As with all versions, ALICE Clips are included.