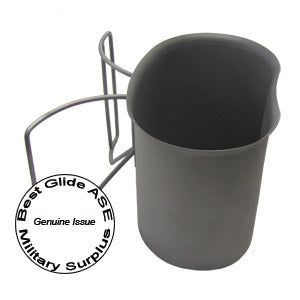 This is the Genuine Issue US Military Canteen Cup. Made in the USA and designed to fit on the 1 QT Military Issue Canteen, this canteen cup is the canteen cup issued to U.S. Military Troops. It should not be confused with versions that claim to be "made to military specs" or "GI Style Canteen Cup", which are not the real thing.

This Genuine Military Issue Canteen Cup is made of heavy gauge stainless steel and utilizes the new "butterfly style" folding handles. It is highly durable and with proper care, can last you a lifetime.

The Genuine Issue Military Canteen Cup is a piece of no frills survival and outdoor adventure equipment and can be used for cooking, heating water, signaling help (metal banging on metal is an excellent noise maker), heater (in combination with gel fuel or Esbit tabs), emergency shovel or just making a cup of hot coffee. Don't be confused by the low cost of this item. Because of its years of use and production, these canteen cups are very inexpensive but they are NOT a reproduction. They are the genuine issue item.

Our Military Issue Canteen Cups are divided into three categories: New, Very Good and Used. See below for a description of each.

New/Like New - This means the Genuine Military Issue Canteen Cup was received by us still in its original packaging or there were no visible signs of previous use. In many cases, an item looks new and unused upon inspection, but to be sure, we include it in the Very Good Category.  In some cases, there may be minor scratches either inside or outside the cup.  These scratches will from storage by the Military only and not due to use.  If these scratches exist, again, they will be minor.  These cups are frequently stored by inserting one into another to save space, which causes these occasional marks.

Very Good - This means that the item either appears to be in unused condition or has slight marks that show it was either issued and stored or was used several times at the most.  There may be very minor scratches and or very minor discoloring. This rare discoloring can often be removed with a good cleaning.  There is sometimes, but rarely, a very minor dent in the cup.  There may be dust or dirt showing where it may have been stored for an unknown period of time.

Used - This includes everything else, while still assuring that the Military Surplus Canteen Cup is fully functional.  There may be discoloration from the cup being used to heat food or liquid over a fire. There may also be a minor dent or two in the cup, not effecting the effectiveness of the cup in any way.  In short, this canteen cup will be fully functional but will likely not look new. It will do everything it was designed to do when new.