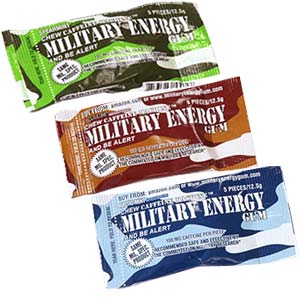 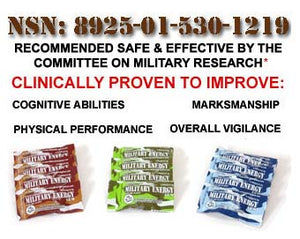 Stay Alert Caffeine Gum has changed names to Military Energy Gum. However, it is the same great, military issue alert gum it always was.

The Walter Reed Institute of Army Research has worked and tested for 6 years to help stop fatigue related injuries and deaths.

Troops and survivalists no longer have to resort to eating freeze dried coffee grounds to stay alert. Military Energy Gum has been field tested and approved for First-Strike rations, currently issued to the US Military.

Not only does Military Energy Gum decrease accidents, but it increases soldier/survivor performance. Clinical studies have proven increased physical and cognitive performance as well as improved marksmanship and overall vigilance under sleep deprived conditions. Walter Reed has concluded that Military Energy caffeinated chewing gum provides the most rapid absorption of caffeine by mouth, while also being the most lightweight, compact, and convenient.

Members of the Victory detachment of the Rapid Equipping Force-Iraq, try military caffeine gum Jan. 13. Each piece of the gum contains 100 mg of caffeine, which is about the amount found in a six-ounce cup of coffee. Capt. Patrick McNutt

Gum 5 times faster than coffee Each piece of military caffeine gum contains 100 mg of caffeine, which is about the amount found in a six-ounce cup of coffee. “Because it’s chewed, it delivers caffeine to the body four to five times faster than a liquid or pill because it’s absorbed through tissues in the mouth — not the gut, like in traditional formulations,” Dr. Kamimori, a behavioral Army researcher, said.

A sleep researcher, he learned of the idea of delivering caffeine through gum in 1998. Congress funded the first study on the gum a year later. When the study validated how fast the caffeine was absorbed in the body, the U.S. Army Medical Research and Materiel Command began developing and testing military caffeine gum for use in sustained or continuous military operations when Soldiers typically don’t get enough sleep.

A report from the Committee on Military Nutrition Research on “Caffeine for the sustainability of mental task performance” published in 2001 also lent more support for the product. Included in the report was a review of the detrimental effects of sleep restriction and sleep deprivation on mental and physical performance. The report concluded that caffeine was safe and effective and supported developing the caffeinated chewing gum.

Kamimori’s staff has validated the gum’s physiological effects in both single and multiple doses. The staff was also able to determine the best dosing regimens for Soldiers who, because of their mission, aren’t able to go to sleep.

“We’ve also evaluated the effects of habitual use of the gum and determined the effects of caffeine administration on the subsequent ability to sleep in Soldiers who were kept awake for 36 to 77 hours straight,” Kamimori said. “They were able to sleep just as well as the groups that received placebos.”

“In three studies, using multiple administrations of caffeine with, they (Soldiers) military caffeine gum reported that alertness, marksmanship — both simulated and live fire — vigilance on observation and reconnaissance tasks and physical performance during simulated operations were either maintained or improved as compared to those Soldiers who received a placebo chewing gum,” he said.

The Department of Defense Combat Feeding Program of the Natick Soldier Center in Massachusetts also tested and approved the gum to become a component of the experimental “First Strike Ration.” The lightweight ration is designed for Special Operations Forces.

Three hundred cases of the military caffeine gum went to Soldiers in the field in 2004. “What we’ve heard from troops using the product both in the U.S. and in the Middle East has been positive,” Kamimori said.