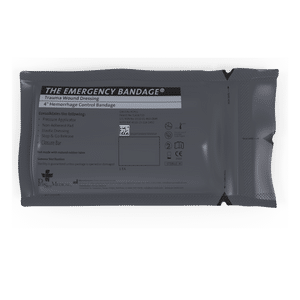 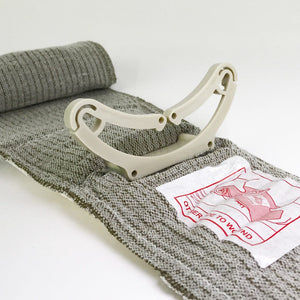 The 4" Military Emergency Bandage, also known as the Israeli Bandage and Military Trauma Bandage, is the first major innovation of its kind in over 50 years! It is designed to staunch blood flow from traumatic hemorrhagic wounds in pre-hospital emergency situations. The Emergency Bandage consolidates many first aid devices such as: primary dressing, pressure applicators, secondary dressing and tourniquets, into one unit.

This is the very popular version of the Emergency Bandage in a 4" size. The Military Personal Field Dressing is approved under NSN: 6510-01-460-0849 for government use.

The Emergency Bandage was designed with the most extreme conditions in mind and designed to treat every possible bleeding wound. The sterile, non-adherent bandage applies pressure to the site, is easily wrapped, secured, and acts as a tourniquet in cases of severe bleeding. The emergency bandage is so easy to use that even an injured person can apply the bandage with only one hand.

Would you like to know more about the Emergency Bandage?

STATISTICS: * 90% of battle deaths occur in the pre-hospital phase * About half of all battlefield fatalities are due to hemorrhage bleeding * The majority of the hemorrhage occurs on the battlefield * Historically, hemorrhage is the single major cause of death among those killed in action * Up to 25% of battle casualties could benefit from rapid hemorrhage control * Trauma is the leading cause of death for persons aged 1-44 * Trauma causes more deaths annually in the U.S. than all diseases combined * Average EMS response time from report of injury to EMS arrival on the scene is 6-8 minutes * Average on-scene treatment time is 30-40 minutes * Average transport time to hospital is 8-10 minutes

The Emergency Bandage is superior to all known field dressings/bandages in its performance, consolidation of functions, versatility and innovation- saving time, storage space and money. It is also known as the Israeli Bandage, Military Compression Bandage and the Trauma Bandage. Statistically, the Emergency Bandage has been proven to significantly reduce hemorrhaging and improve survival.